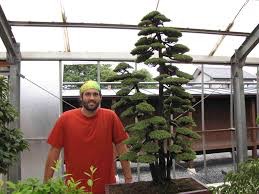 Join this workshop and learn styling and carving techniques with Tyler, here at Plant City Bonsai.  Steve has just released a new group of the 30 year old Procumbent Nana Junipers, plus there are still many trees with naturally
occurring deadwood  for you to choose and enhance.

ABOUT TYLER
He attended several workshops with Boon Manakitivipart of Bonsai Boone in the Bay area of California.  Boon assisted Tyler in gaining an apphrenticeship with Sinji Suzuki in Obuse Japan.  Tyler began his apprenticeship with Mr. Suzuki in June of 2011, which lasted for five years, and in the Spring of 2016 he received his professional certification from the Nippon Bonsai Association.  While working under Mr. Suzuki, Tyler was able to work on a variety of coniferous and deciduous trees. He was responsible for refining the trees and preparing the trees to be entered in Japan’s top bonsai competitions which included Kokufu-ten, Taikan-ten and Sakafu-Ten.  Several of these trees won top prizes.

We are pleased to have the opportunity to offer another workshop instructor here at Plant City Bonsai and look forward to another exciting day learning new techniques!